A FORCE FOR NATURE. 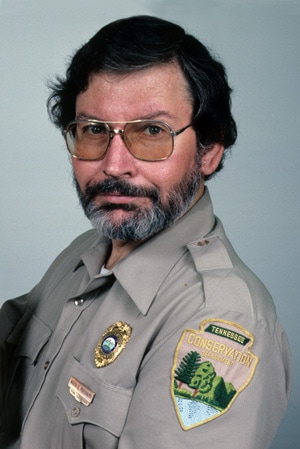 Mack Prichard began his career with Tennessee’s Department of Conservation when he was just 16 years old, as a seasonal naturalist at Shelby Forest State Park near Memphis. In addition to developing a profound knowledge of natural and cultural history, he had a gift for connecting with the public.  Following a series of promotions (including one to head the state's new archeology division in 1971), he moved to the Conservation Education section where he became Tennessee’s first State Naturalist. Mack served under eight Tennessee governors — Clement, Ellington, Dunn, Blanton, Alexander, McWherter, Sundquist and Bredesen.

On May 24, 2008, then-Governor Phil Bredesen signed Senate Joint Resolution 1007 commending Mack’s half-century as “The Conservation Conscience” of Tennessee and conferring on him the title Tennessee State Park Naturalist Emeritus.  After Mack passed in April of 2020, Governor Bill Lee proclaimed March 31, 2021 as "Mack Prichard Day" in Tennessee.

As had been the case for over 50 years, Mack was a most eloquent spokesman for all things related to the modern history of conservation in Tennessee and was always in demand as a speaker to groups across Tennessee and nationwide.​